So here’s your weekly fix of Travel Treasure; you just gotta do, what you gotta do, to get a dolphin’s attention!

Prepare to be inspired and why not share your treasure too?

A Dizzy Dance with Dolphins

by Emily-Ann Elliott of ‘The Grown Up Gap Year’ 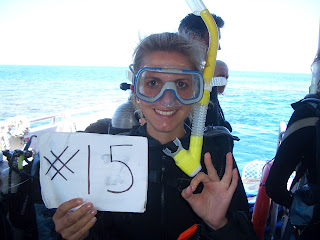 Swimming with dolphins in New Zealand.

Jumping into the icy cold, choppy, seawater took my breath away and it took me a few moments to notice that I wasn’t alone. A beady eye was looking at with me with interest and then another one appeared, and another, and another…

Before I knew it I was absolutely surrounded by dolphins, swimming beneath me and back flipping next to me.

My visit to Kaikoura came about as part of my 30b430 trip, where I ticked off 30 things around the world I’d always wanted to do before my 30th birthday. Our morning began at 5.30am and as we sat in the boat bleary eyed, the crew warned us that they couldn’t guarantee that we’d actually see anything. But just 25 minutes later we started to spot some dolphins following us. Now I’ve seen the odd dolphin before, but I’ve never experienced a whole pod and seeing around 400 together was an incredible sight.

We jumped into the water and began to make the silly squeaking sounds we’d been told would attract the dolphins’ attention. My self-consciousness instantly vanished as the dolphins curiously moved closer to check out these strange creatures.

Dusky dolphins are one of the smallest species, but they were still the same length as me and I couldn’t believe the speed at which they swam. To be so close to wild animals was such a fantastic feeling and I kept ending up with mouthfuls of seawater as I was laughing so much.

The crew told us a good way to play with the dolphins is to make eye contact with them before swimming around in a circle, which might encourage them to copy you. I decided to give it a go and caught the attention of one before madly trying to propel myself around. It looked at me quizzically, as if to say: “Okay, so we’re playing this game?”, before swimming around me so quickly that it made me dizzy.

It was one of the most amazing moments of my trip and is something I will treasure forever.